The decline in the share price of AT&T ( T)  is attracting attention. One Real Money reader emailed me and his note read like he was on the edge of his chair. Another person, a long-time friend in the business and senior portfolio manager at a large institution, called me and wanted to know what my charts were telling me. A quick search and we know that the stock was downgraded by one bank, but there is probably more going on.

Let’s dive into the charts.

In this daily bar chart of T, below, we can see that prices have been under considerable selling pressure since the middle of May with a large gap to the downside. Trading volume was heavy so we know that traders voted with their feet. The On-Balance-Volume (OBV) line has continued lower and tells us that aggressive selling continues.

The slopes of the 50-day and 200-day moving average lines are negative (bearish). The 12-day price momentum study does not show us a bullish divergence as the pace of the decline has not slowed.

In this weekly Japanese candlestick chart of T, below, we can see the past three years of action. Prices have made new lows for the move down. The slope of the 40-week moving average line is negative. The OBV line is weak and the 12-week price momentum study is not slowing yet. Not a good picture at all.

In this long-term bar chart of T, below, we can see the price action back to 1985. Prices are revisiting levels not seen since 2009 – an ugly time in the markets. Inexperienced chart readers may suggest that T has support in the $25-$20 area but in reality this is only psychological support at best. Traders should not be expected to be buyers in this area again because it held there in 2009. Interest in buying T in that area has long since moved on.

In this weekly close only Point and Figure chart of T, below, we used a five-box reversal filter. Here the software is projecting the $14 area as a price target. 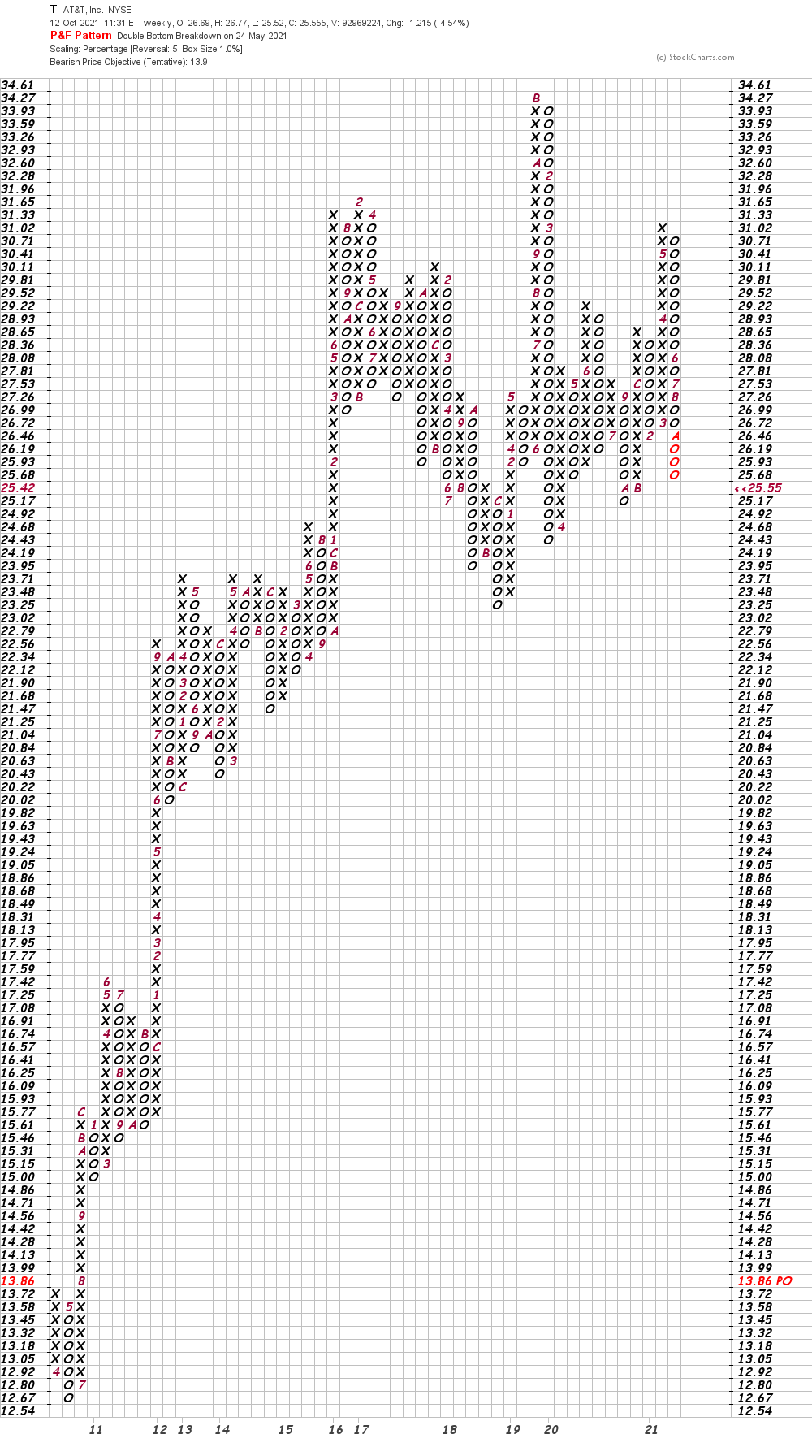 Get an email alert each time I write an article for Real Money. Click the “+Follow” next to my byline to this article.

Real Money’s message boards are strictly for the open exchange of investment ideas among registered users. Any discussions or subjects off that topic or that do not promote this goal will be removed at the discretion of the site’s moderators. Abusive, insensitive or threatening comments will not be tolerated and will be deleted. Thank you for your cooperation.
If you have questions, please contact us here.

Thank you, your email to has been sent successfully.

We’re sorry. There was a problem trying to send your email to .
Please contact customer support to let us know.

Please Join or Log In to Email Our Authors.

‘Aquaman 2’ Behind the Scenes With Jason Momoa at DC FanDome