If the TCL 20S and 20SE phones were on The Price Is Right, you would probably guess much higher prices than their retail ones. With the 20S retailing for $250 and the 20SE going for $190, these sub-$300 4G phones are the real deal. They check all the boxes for what you’d want in a smartphone: they have big and bright screens, large 5,000mAh batteries, 128GB of internal storage, and “good enough” cameras. You even get a free clear silicone case inside each box.

TCL certainly knows a thing or two about manufacturing budget 4K Smart TVs, affordable soundbars, and many other gadgets. Heck, it was already quietly producing phones for the likes of BlackBerry, Alcatel, and Palm before starting its own eponymous line in 2020. Now it’s taking those skills building other accessibly priced gadgets to its phone line.

Unlike the fancier TCL 20S Pro, neither the 20S nor the 20SE has the latest and greatest processor, nor do they support 5G networking — those aren’t unsurprising omissions at these price points. But given TCL’s history, it’s no wonder the real stars of the TCL 20S and 20SE are their brilliant displays — though they each use different panels. Both phones look and feel more luxurious than they are because of their solid build quality, as well as attention to the details users really actually care about: long-lasting battery life, strong performance, ample storage, as well as ingenious design. Who says good things can’t come in budget-friendly packages? 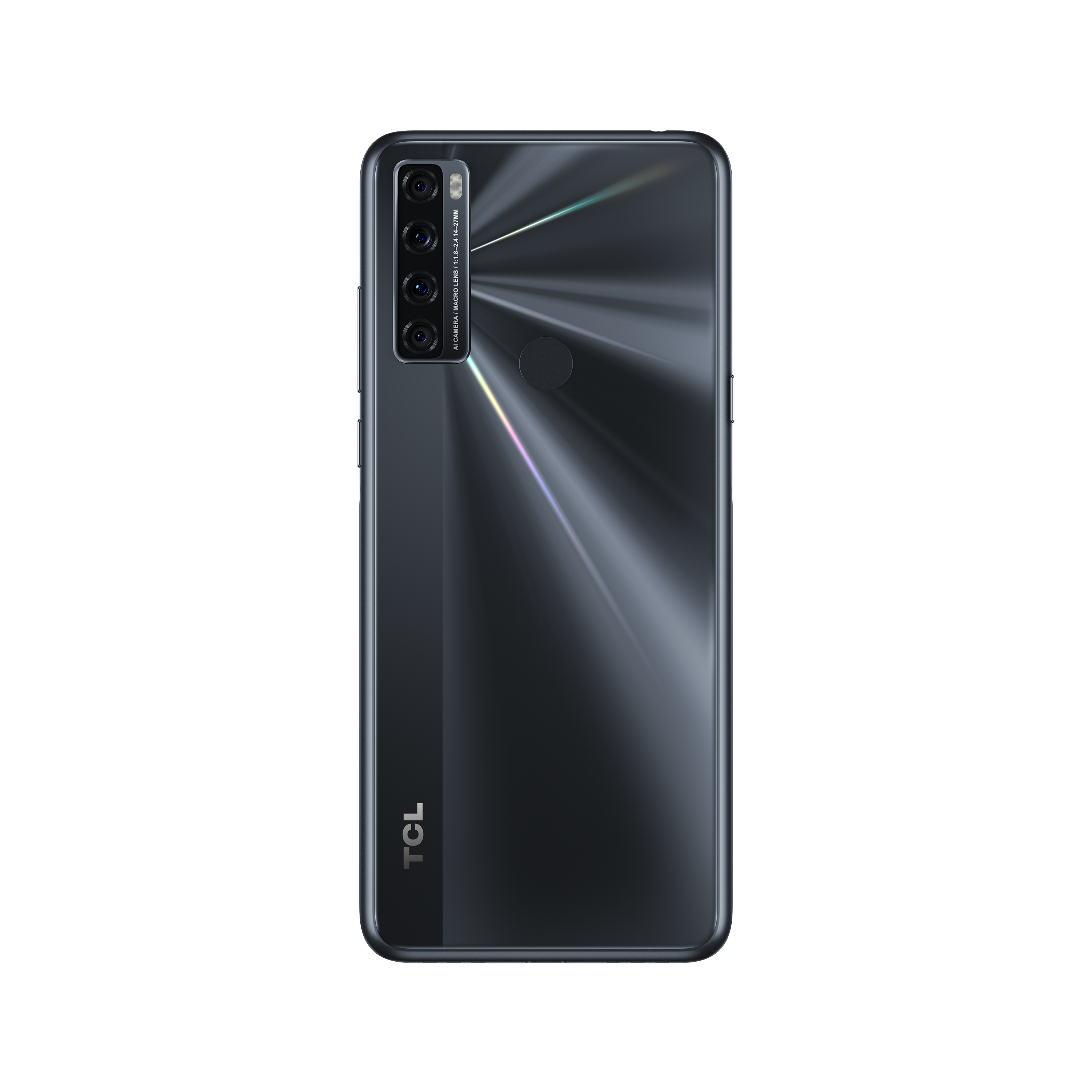 The $190 20SE has a 6.82-inch display, which, at 720 pixels wide, is too low-resolution for a screen this large (720 x 1640 pixels; aspect ratio 20.5:9). I tried watching the 4K Dune trailer on YouTube, and it looked too dim and fuzzy at 720p for me to enjoy the video. Nevertheless, this display offers vibrant colors even at 50 percent brightness, whether or not you turn on the NXTVISION display optimization software (I did not see much difference either way).

The higher-priced 20S has a brighter yet slightly smaller 6.67-inch screen, with a higher-resolution FHD+ LCD display than the 20SE (1080 x 2400 pixels with 20:9 aspect ratio). When I watched the same Dune trailer at 1080p on the 20S, I could actually see sharper lines and more details this time around. Both displays look bright enough outdoors that I can read text if I boost the screen to 100 percent brightness. I also appreciate how unobtrusive the pinhole front camera is on the 20S compared to the 20SE’s tear-drop design, the latter of which actually cuts into the top of the display.

Of the two models, the 20S is slightly more manageable to use. But it’s still a big enough phone that I need two hands to use it safely. It can be a bit of a reach for my fingers to navigate different parts of the screen and hold it in the same hand, so I need my other hand to balance the device. At 0.23 inches (5.84mm) taller and 0.25oz (7.1g) heavier, the 20SE is physically bigger than the 20S, but its technical components are not in the same weight class.

With a price that is $60 less than the 20S, TCL had to find savings in the $190 20SE anywhere it could. For one thing, the 20SE uses the lower-tier Qualcomm Snapdragon 460 chipset, whose slower processing speed can’t make up ground with 4GB of RAM. The 20S, on the other hand, is powered by the faster Qualcomm Snapdragon 665 processor and is also supported by 4GB of RAM. The difference between the two isn’t very noticeable in basic texting and social media doomscrolling, but I would occasionally have to open an app or webpage twice on the 20SE because it wouldn’t load the first time around.

To see what these devices are capable of, I played a couple rounds of Pokemon Unite to see how they’d fare. Both TCL phones took about as long to load the game, whereas the OnePlus 9 Pro (with a Qualcomm Snapdragon 888 chip) loaded the same round in about half the time. Since the 20SE has a lesser quality display and processor, I was not surprised that my Pikachu moved with a bit of lag. It was only slightly more responsive on the 20S, however. The 20SE’s dual speakers are also louder and buzzier than the 20S speakers, which sounded quieter but produced a more nuanced sound.

Despite their differences, both devices offer plenty of internal storage at 128GB and give you the option to expand that storage via microSD. The 20S’ microSD slot accepts up to a 1TB card, while the 20SE only supports up to a 256GB card. Both phones run Android 11 out of the box, with a TCL skin called TCL UI. Since the 20S will get one major OS update (TCL won’t commit to the same for the 20SE) and both phones will get two years of security updates, you’ll have ample room to install these upgrades and stash your content for the next few years.

The fingerprint sensors on the 20S and 20SE deserve a special mention as they’re quick to recognize my fingerprint and unlock the phones. I especially love the fingerprint sensor that is built into the 20S’ power button, located on the right side of the phone. With just one touch, you not only wake up your phone but also unlock it in an elegant and intuitive way. The 20SE has a more traditional round fingerprint sensor on the back of the device that works just as well.

Facial recognition on the 20SE can be rather useless. It either doesn’t recognize my face or asks me to touch an icon on the lock screen so that I can unlock the phone with my face, which entirely defeats the purpose of using a hands-free method to unlock. (Thankfully, you can disable this “feature.”) Facial recognition simply worked more consistently on the 20S than on the 20SE.

Both phones include a 3.5mm audio jack on top, volume rocker on the right side, non-customizable Google Assistant button on the left, plus a USB-C port and a pair of bottom-firing dual speakers. The 20S has an understated back that looks curved from various angles, but the layer of “micron-sized prismatic crystals’’ actually makes the back cover really fingerprint-resistant. The 20SE’s back cover is the complete opposite: it’s a fingerprint disaster zone, thanks to its shiny, nano-photoetched back.

With a 5,000mAH battery inside both phones, it was a challenge to use up that much power on deadline without doing anything out of the ordinary. My normal phone diet includes: checking my two email accounts, texting on WhatsApp and Google Hangouts, tweeting on Twitter, visiting my usual slate of websites like Reddit, as well as listening to a podcast or two. Due to the pandemic, I was home during my testing but tried to use a mix of Wi-Fi and 4G service to mimic real-world use.

I actually got results that are close to TCL’s claims. I used the 20S for about 31 hours on one charge (TCL suggested 36 hours on 3G/4G) and took around 2.5 hours to fully charge the device, which is hardly a “fast charge” as claimed by TCL’s product sheet. Similarly, the 20SE lasted around 32 hours on one charge, compared to TCL’s estimate of 31 hours of use on 4G.

Don’t get too excited about the cameras on the 20S or the 20SE, though: they can take great snaps in natural light, but I wouldn’t hang these photos on my wall. Both phones have a quad-camera setup, but each model uses different sensors. While the 20S has a 64-megapixel main and a 15-megapixel front camera, and the 20SE has a 48-megapixel main and 13-megapixel front camera, these numbers don’t really say anything about the quality of their photos.

Sample photos from the TCL 20S

I snapped a bunch of wide-angle and main camera shots (of the same area) using both phones. The ones from the 20S look more balanced with plenty of details, compared to the ones from the 20SE, where the water fountain area looks more over-exposed, especially at 4x cropped zoom.

There’s a noticeable difference in color between the photos captured with the main cameras and the ultrawide angle cameras on both phones (8-megapixel on the 20S; 5-megapixel on the 20SE). There is also a problem with the Super Macro mode on both phones’ 2-megapixel macro cameras. Photos of the fuchsia flower look pixelated and flat, while the colors from the indoor photos of the blue hydrangea look way over-saturated in the yellow channel.

Based on the price point of these phones, I was surprised when any of the night shots came out somewhat presentable (I know they’re in varying degrees of blurriness). To be fair, even the photos from my Pixel 5 weren’t perfect. Both the 20S and 20SE struggled to focus with so many different light sources in the dark, and each photo required many awkward seconds to process. The 20S produced the sharper photo, while the 20SE’s photos look much less detailed, especially if you look at the lights from the office towers in Manhattan.


Sample photos from the TCL 20SE

At first glance, both front-facing cameras captured decent selfies. But I have to give the edge to the 20S’ 16-megapixel camera for the more realistic colors and brighter photos. The selfie from the 20SE’s 13-megapixel front cam just looked more over-exposed: my sunglasses looked frosted, and my skin looked unnaturally pale.

I can’t really think of a higher quality budget phone in the $250 range that can beat the TCL 20S. It’s got all the hallmarks of a more expensive device but with a more affordable price tag. Its vibrant 6.67-inch 1080p display doesn’t look out of place next to other flagship phones, and it feels luxurious with that fingerprint-proofed layer of “micron-sized prismatic crystals’’ on its back cover.

Sure, the $250 Moto G Power (2021) has an equally large battery and a slightly newer processor. In exchange, you get a meager 64GB of internal storage, which is a far cry from the 128GB plus microSD card slot that is offered by the 20S. The $269 OnePlus Nord 10 (global GSM unlocked version) is also an option. It uses a newer Snapdragon chip that is 5G-compatible but still runs Android 10 when Android 12 is ready to drop. If you don’t care about having a 5G-ready phone right now, then the TCL 20S makes more sense.

If you’re looking for an unlocked phone that is compatible with Verizon and most 4G GSM networks like AT&T and T-Mobile, I don’t think you can go wrong with this unlocked TCL 20S.

If your budget is strictly sub-$200 and won’t be using Verizon as your carrier, then TCL 20SE is a smart choice. While the $180 OnePlus Nord N100 might save you $10, you’ll lose half the amount of internal storage for minimal savings (from 128GB on the TCL 20SE to 64GB on the N100) — that’s a terrible trade-off. You’ll be happier with a big bright screen, ample storage and battery life, as well as the ability to choose any GSM network (including AT&T and T-Mobile). If you don’t mind spending an extra $60, though, the 20S is worth the upgrade — your future self will thank you.

‘Aquaman 2’ Behind the Scenes With Jason Momoa at DC FanDome