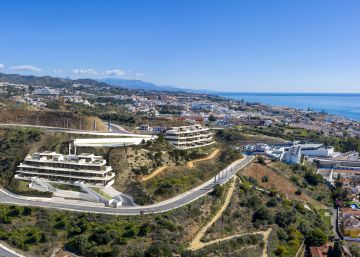 Property developers are verifying the rapid recovery of home sales on the Costa del Sol. The return of foreign buyers, the boom in purchases on the coast after the Covid-19 pandemic and the booming activity in Malaga are turning this area into one of the thriving nuclei of new construction sales.

The companies in the development sector reveal that home reservations and pre-sales are at an excellent rate, since practically everything that is marketed is sold and at a rapid pace, in the face of a certain slowdown that came before the pandemic due to excess supply, the difficulties of small developers to find financing and the lack of foreign buyer during sanitary restrictions.

“Business is doing very well,” he acknowledges. Violeta Aragon, Secretary General of the Provincial Association of Builders and Promoters of Malaga (ACP Malaga). As proof, remember that so far this year, until September, 6,290 new-build homes have been transmitted, 12% more than in all of 2020 and in 2019, years that remained in the 5,600 houses.

“We believed that the pandemic was going to cause a catastrophe and what it has shown is that real estate, after the previous crisis, is a much stronger sector,” he says Inigo Molina, director of the Andalusia office of the Colliers consultancy. “So far this year the figures for the sale of homes in Costa del Sol, from Nerja to Manilva, have improved not only those of 2020, which is logical since we were in the worst moments of a state of alarm, closures and travel limitations, rather, we are above the sales of the first half of 2019 ”, he adds.

Mario Lapiedra, General Real Estate Director of Neinor Homes confesses that the business is doing “really well” in this Malaga beach area. “We knew that in the post-Covid stage there was going to be a rebound in stored demand that had not been able to come and buy for almost a year, but the truth is that the estimates are being widely exceeded.”

In addition to the return of foreign buyers, Lapiedra believes as an explanatory factor the increase in holiday demand caused by the need and desire to spend more time abroad and in these types of destinations. “To a lesser extent, but also important, there is an increase in the number of people who have decided to move their permanent home to the Costa del Sol”, he assures, both from European and national buyers, “either because they have advanced retirement, or because the new labor flexibility allows it ”.

The general secretary of the Malaga employers’ association explains, for her part, that there are several reasons for the good behavior in the province: “We live well, we have a good climate, good infrastructures and a thriving economic activity in Malaga.”

Jose Ignacio Fernandez, territorial director of Aedas Homes on the Costa del Sol agrees on the relaunch. “It is, without a doubt, one of the main coastal residential markets. There is a large dammed demand generated during the pandemic and it is being one of the epicenters of the increase in sales that is experienced in the sector at a general level ”, he explains. “We are perceiving that there are clients in coastal areas who see their future home next to the beach not only as a place to rest and enjoy during vacation periods, but also as a place from which they can telecommute,” he adds.

Fernández assures that this area is emerging as a great alternative to live and work, even in the capital. “There is a lot of international and national talent who realize the advantages that a city like Malaga has to live and work and who want a house here.”

From the developer Kronos Homes they highlight that the Costa del Sol “has recovered much faster” than other coastal areas. “It has always been the place with the highest demand from foreign customers due to its climate, with more than 300 days of sunshine a year, and its easy access via the airport with daily flights to all European destinations and a magnificent infrastructure”, they recall.

The figures of the companies

In the case of Kronos Homes, the numbers indicate that sales in 2021 have tripled those of 2020 and improved those of 2019.

On the other hand, in Neinor they indicate that they have 950 homes in this market, of which this year they have sold about 300 units and will end the year with 70% of the stock sold.

Another of the great promoters Metrovacesa, anticipates that in the first 10 months, it has delivered about 500 homes in the province of Malaga, where they see a “remarkable and gradual recovery” throughout this year. From this company, they add that another reason is the consolidation of Nordic and Central European buyers, “who have outperformed the traditional British market, offsetting the possible Brexit effect.”

José Ignacio Fernández, from Aedas, explains that after the commercial reactivation there is an increase in international customers, from up to 19 different countries, which have gone from representing 59% in 2019 to 72% in 2021 compared to the remaining 28% of Spanish buyers . The different experts consulted highlight a relevant role of the Swedes, Belgians, Norwegians, the Dutch and, to a lesser extent in the case of the purchase of new construction, the British.

Íñigo Molina, from Colliers reflects that this area is mainly nourished by international clients. “Traditionally, the British market has been the main foreign buyer, but in recent years buyers from other countries that had less representation have entered with force. Thus, the Nordic countries are very active ”.